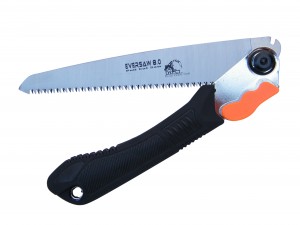 There are some pretty big differences between Home Planet Gear’s EverSaw 8.0 and the traditional Western saws that most of us are more familiar with. You may not be interested in the Applied Physics behind the differences in saw types, but we think that you will be interested in how “push style saws” differ from “pull saws” with usage. There is much more to it than simply which angle the teeth are pointing.

Our EverSaw 8.0 is an Asian or Japanese style pull cut saw with many significant advantages over push saws, the top two of which are less effort expended and better accuracy. 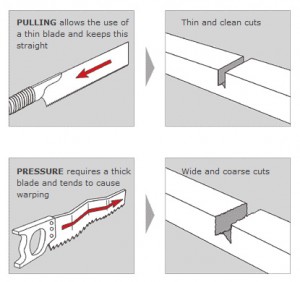 The basic mechanics of a pull saw vs. push saw is this: when cutting with a pull saw blade, the length of the blade gets pulled taut and the blade becomes almost perfectly straight. A push saw, however, always has some degree of bending in the blade when cutting. This simple difference has many significant implications.

Pulling uses the blade’s tensile strength, compared to pushing with compressive strength. Have you ever seen a slow-motion video of an arrow being shot from a bow? When the arrow is propelled forward from its back notch by the bowstring, the middle of the arrow shaft bends to compress. Push saws also do this to a lesser degree, which creates extra friction during cutting.

Because of this, push saws require thicker blades to prevent excessive bending. Thicker blades and bending means more friction while cutting, more effort required to cut, and more sawdust produced, leaving slightly shorter lengths of material after cutting. Pulls saws on the other hand, cut quickly with less energy spent sawing and produce less sawdust to clean up. If you have never tried a pull saw, we highly recommend comparing the two styles side by side. There is a clear difference!

The physical body motion of pulling compared to pushing also results in thinner, straighter cuts. Standing in front of a mirror, it is more difficult for most people to quickly, repeatedly extend and retract their arm to point to the reflection of their nose on the mirror than to do the same touching their actual nose. Human beings are simply better at pulling things in close to our bodies in a specific direction or to an exact point than pushing things away with precision. We’re just naturally better at the inward direction than outward.

It’s also naturally easier to drag an object than to plow or push with it. If you were to go to the beach and try to draw a long, straight line in the sand with a stick, most people would find it easier to get a straight line by dragging the stick on one’s side or behind them than by plowing forward through the sand with the stick in front of them. This concept is especially important when sawing while starting a fresh cut before the groove is deep enough to guide the blade. This leads us to our next point.

Easier and safer to cut a clean cut

There is some increased risk of cutting or scraping the hand you are using to hold an object while starting a new cut. Imagine again that you are drawing a line in the sand at the beach and that there are large rocks below the surface of the sand. If you are dragging the stick behind you, chances are that the stick will simply ride over the top of the rocks and continue on a more or less straight path. However, if you are plowing or pushing forward with the stick in front of you and hit a rock, there is a greater chance of the stick snapping or veering off to either side. When a saw blade hits a knot or when starting a new cut, it is easier to maintain control over the direction with a pull saw, pulling directly back, rather than a push saw which has a higher chance of swinging out to either side.

The thin blades of pull saws cut with a thinner kerf (the gap or groove of a cut) than push saws. Since the kerf width is so thin, and since pull saws cut with less effort than push saws, it is easy to correct cuts quickly and without significantly shortening the board. You can often manage to easily correct mistakes of odd angles by sawing off a sliver of the end to get the exact right angle on the cut.

Unfortunately, the thin blades of pull saws make them more difficult to sharpen when the teeth get dulled, but not many people these days are interested in sharpening their old saws when they can be replaced inexpensively. Since the pull saw blades are thinner, they require less resources to produce and are generally less expensive than push saws unless imported directly from Japan, etc. We believe that Home Planet Gear’s EverSaw 8.0 is very reasonably priced and we hope you agree!

So remember, if you’re “putting your back into it” with the EverSaw 8.0, focus on the pull strokes!

This site uses Akismet to reduce spam. Learn how your comment data is processed.